I was eating fruit and macaroni salads when I saw Carina walking towards me with a big smile plastered on her face. She excitedly shouted at me, “Selle, third ka second ako!” (Selle, you’re third and I’m second!) Wow, a podium finish for both of us! A surprise indeed! Then I heard my name being called by the emcees for placing third in my age group. I went up on stage to accept my prizes—a Phiten necklace, a can of sun protection spray, and a bronze medal. 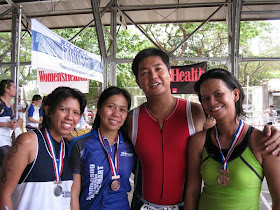 My first win for aquathlon! How did it happen? Here's my story ...

The last swim I had was during the 4th Sheerwill Aquathlon Cup (SWAC) held at Camp Aguinaldo just a month ago. SWAC, is a simulation of aquathlon races for neophyte aquathletes initiated by Rico a.k.a. Sheer Will, owner of By Sheer Will blog, and fondly called by his Takbo.ph friends and fellow aquathletes as "Commissioner Rico".

I never got the chance to swim again after that date. I suffered tamaditis (tama-dī’tĭs). Tamaditis is a term I coined from the Tagalog word tamad which means lazy and I just added itis to make it sound more like a disease. Tamaditis, according to my personal dictionary, means being too lazy to do something.

As the Ateneo Aquathlon 2010 race date was getting nearer, I couldn't help feeling panicky for not being able to swim. To cure this tamaditis syndrome, I forced myself to join some Takbo.ph friends during their regular swim training at the Army pool, the week before race date. My bad. This shouldn’t be.

That same week, I received an e-mail notice from the race organizer that the race for our age group category would start at noontime. The first thing that I thought was, “goodness, I couldn’t watch the Pacman vs. Clottey fight!” I’m no boxing fan but one thing that I love watching the most is the artist or singer who would be singing the Philippine National Anthem. As we all know, the proper way of singing the national anthem during a Pacman fight has been a controversial issue for quite sometime. The bonus part is watching how Pacman fights his opponent.

Our age group schedule has its pros and cons. The ultimate pro is I don’t have to wake up early. And the con is … yikes! I have to run under scorching heat of the sun! A first. Well, I have run up to 10AM but not at noontime. Running at noontime might be too easy for our recent BDM102 finishers. But as for me … no way! Well, “black is beautiful, but too much black is charcoal!” Hahaha!

Back to the aquathlon race…

Arrived at the venue a few minutes before 11AM. Plenty of time to register, get my race packet, and for body number marking. Guess what? The number I got is my lucky number, five. Not just one but with two more fives added. That makes it 555. But it reminds me more of that famous brand of sardines, 555. Sounds fishy! Olala! 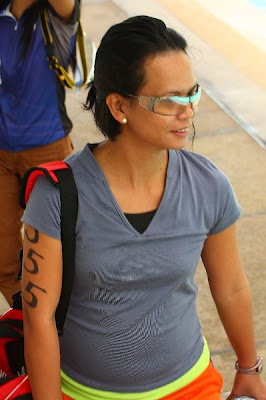 Mind you I was a bit nervous while watching the other age groups. Their flutter kicks sounded like washing machines. I wonder of the outcome of my swim since I didn’t have enough time to train. I just told myself, “to God be the glory!” I psyched myself to swim the race like it’s only a practice swim and aimed not to be the last swimmer in the group.

While waiting at the holding area, I told a fellow aquathlete, Carina a.k.a. Flying Boar of Takbo.ph, that this would be a healthy competition for both of us. Then we were asked to go down to a flight of stairs leading to the pool area for race orientation. One of the marshals quickly briefed us with the rules of the aquathlon race. (Source: Ateneo aquathlon site) 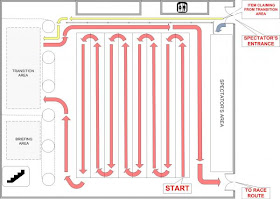 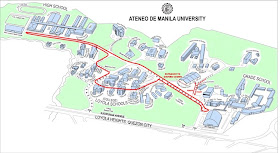 There were more or less ten of us in our age group in the women’s division. We were told to place our running gear first in the transition area before we were asked to proceed at the starting line.

As soon as we heard the go signal off we went swimming. Swimming can be very difficult. Sometimes a swimmer ahead of you kicked you. Sometimes the straps of your goggles might slip off from your head. Or, you end up gasping for breath.

During the swim I remain focused of the task at hand. Winning was really far from my mind. Just wanted to get it done and over with.

Transition time, a quick change from swimsuit to running gear, can be awkward. After the swim, I felt dizzy, a bit disoriented, and my throat has gone dry that I made a choking or coughing sound. I couldn’t find where I put my running gear! May be I spent a few minutes looking for my stuff. When I finally saw it, I just donned my shoes, tied its laces, wore the singlet, and ran slowly, allowing my body to adjust.

Coming from a swim and then running uphill can be intimidating. I couldn’t understand the beating of my heart plus the sun’s heat was biting my skin. I was thirsty. When I saw one runner struggling with her pace, it gave me hope that I might be able to overtake her if I continue my pace. Eventually, I overtook not only one but more than three runners. I might not be in the lead pack but at least I was not the last one running. I was happy with that.

The water aid station marshals (and cheerers at the same time), a welcome respite from the heat and tiring run. What a relief it was to finally reach the finish line. Doc Marvin a.k.a. Nuttybunny was a bit surprised to see me saying, “Nge, andyan ka na pala!” (oh, you’re here!). They were telling me that Ellen a.k.a. Kelcy33 placed third in her age group. Good news!

I approached the timekeeper and asked for my time. I was told I finished the race in forty-three minutes. Wow! I was surprised! Me? 43 minutes? It was unofficial. (Note: But in the unofficial results that came out at a later date, my time was 0:58.00 minutes and not 0:43.00 minutes as previously told.)

I didn't know what to write after this overwhelming experience. But I didn't want to end this post without thanking some people who were instrumental why I became an aquathlete.

Firstly, I would like to thank Sheer Will for encouraging me to join the 1st Corregidor Aquathlon last year. If not for that experience, I wouldn't have been that confident of my swimming prowess.

Secondly, thank you all fellow runners and aquathletes (you know who you are) for your warm congrats on my podium finish. I am very grateful to Dhenz, Athan, and Timmy for watching our stuff while we were out there racing. Thanks again to Sheer will for the fruit salad and Ellen for the macaroni salad. Of course, it wouldn't be complete without our lensman, Doc Marvin.

Kudos to fellow aquathletes who finished their first official aquathlon. And, to my friends from Takbo.ph who also raced in the Lite and Classic categories. I take my hats off to you guys! 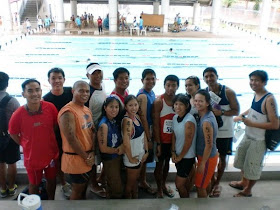 Everything Else is Priceless by Sheer Will

A Hot and Wet Weekend by Running Pinoy

The One About Swimming and Running by Dimsum and Siomai

While the Cat Was Away by Kenkoy Runner